On January 29th, JCCSC had it’s annual Installation of Officers and Awards Luncheon. 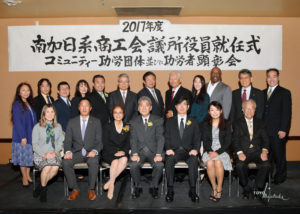 The Nikkei Spirit Award was presented to Kenneth Kasamatsu and Toshiaki Toyoshima.

Kenneth Kasamatsu was born in Los Angeles and attended Loyola High School and earned his Bachelor of Arts degree from the University of Southern California (USC) in 1968. He continued to graduate school at USC majoring in Linguistics.
Kasamatsu started his banking career at Sumitomo Bank of California in 1968, which is now known as California Bank & Trust, and worked for them until 2000. During this time he was the first sansei (third generation Japanese American) appointed to manage a branch of Sumitomo Bank of California in 1980 at their Puente Hills branch and in 1982 he helped establish their Corporate Banking department. He was also part of a team that established the relationship with a 3rd party firm to provide opportunities for customers to invest in securities and later became Southern California Division Branch Administrator and
was responsible for 23 branches. ” They were located in Huntington Beach, Wilshire Grand in Los Angeles, San Diego (appointed Senior Vice President), San Francisco Main and the Los Angeles Main offices. During his tenure as the East Region SVP & Regional Manager, he was responsible for over $750 million in deposits and $500 million in loans.
After 32 years of service with California Bank & Trust, he parted ways in 2000 to make his dream come true and started his own bank Pacific Commerce Bank located in Little Tokyo and servd as its Founder and President. Kasamatsu retired from the Banking industry in 2014 and obtained his Life, Health and Casualty Insurance License and worked as a consultant with Pacific Bridge Companies, a financial consulting company. Presently, he is an Advisor to the CEO of the E-Central Credit Union in Pasadena.
Kasamatsu is no stranger to the Japanese American community. He is indeed a dedicated leader and has been involved with many organizations as a volunteer. In 1982, he was a founding member of the USC Asian Pacific American Support Group, which is now known as the USC Asian Pacific Alumni Association and served as its president. He join the Asian American Drug Abuse Program (AADAP) in 2003 and served as a member of their Board of Directors. He shared his financial expertise to benefit the sound governing of the organization and in 2010 he was elected Board Chair and successfully led the board and the agency through a successful strategic planning process. He retired as Board Chair in 2016. AADAP recognized Kasamatsu with a special tribute at their Showtime 2016 event. He also served as Treasurer and a board member for the Leadership Education for Asian Paci$ cs (LEAP) for 12 years. With the Keiro Nursing Home, he served on their board from 2006-2016 and also held the office of secretary. In 2010, he was a founding member of the Loyola High School’s Asian Pacific Alumni Society and retired in 2016. Other community organizations that he was involved with included the Japanese American Cultural & Community Center, Little Tokyo Service Center, Boy Scouts of America in San Diego and the Nisei Week Foundation.

Toshiaki Toyoshima was born in Hiranai-machi, Tsugaru-gun, Aomori Prefecture in Japan in 1947. He moved to Tokyo to become a sushi chef then relocated to America in 1973 and settled in Los Angeles. In 1980, he opened “Sushi Gen” in Little Tokyo in Los Angles at the age of 33.
Toyoshima is active with several organizations. He is a member of the Tokyo Sushi Kenkyu Sancho Kai, founded for the purposes of carrying on the tradition of Edo-style sushi and training future human resources, served as the 4th president of the Southern California Aomori Prefecture Association; president (2002—03) & Deputy President (2004—present) of the Japanese Restaurant Association of America, founded in 2002 to represent the Japanese food industry in the U.S. and to promote the education and understanding of Japanese food. Its goal is to assist its members, help them be more e! cient, and support their success. Every March, the Association visits a retirement home and provides sushi; every November, the Association helps
host a food festival, contributing to the popularization of Japanese food among the American people.

Since 2008, he continues to serve as the president of the Southern California Association for Nebuta Hayashi Preservation. In the 2007, Nebuta (a warrior-figure festival + oat from Aomori) was featured in the Grand Parade during the Nisei Week Japanese festival, the largest Japanese-community festivity in the U.S. ” is led Toyoshima to start the Southern California Association for Nebuta Hayashi Preservation in 2008. He has made signi$ cant contributions to the introduction of Aomori Nebuta in America by spending his own funds to purchase a warehouse for the creation and preservation of Aomori Nebuta and by making the warehouse the home office of the Aomori Prefecture Association as well as the place for disseminating information about Aomori Nebuta. In 2015 he invited a Nebuta expert from Aomori to help create the Nebuta + oat “Yoshitsune Crossing the Strait of Tsugaru,” which was featured in the Nisei Week Grand Parade as well as the Hollywood Christmas Parade two years in a row, broadcast on TV all across the United States. In 2017, a plan to create a new Nebuta + oat is under way.
In addition, he serves as the Tourism Ambassador for the City of Aomori. Toyoshima and was appointed to this position in 2015 along with Ms. Kaori Nara Turner—they are the $ rst ones to be named for this position while living abroad. With the slogan “Visit Aomori,” their duties involve promoting visitors to travel to Aomori, to give information about the city, and to actively advertise the attraction of the city as a tourism destination.
Toyoshima received the Consul-General’s Award in December 2015. His contributions to the popularization of Japanese food in Los Angeles and to the preservation of Japanese culture was recognized by the then Consul-General of Japan in Los Angeles, Honorable Horinouchi, who presented him with the Consul-General’s Award.

The Nanka Nihon Minyo Kyoukai was founded in 1963 as one of the Japanese Culture Groups within the Cultural Department of the Japanese Chamber of Commerce of Southern California.
When they decided to become an independent organization they had eleven folk song and folk dance groups and currently have seven: Matsumae-kai, Kikutakai, Matsutoyo-kai, Chikurei-kai, Hoshun-kai, Hoen-kai and Kotyobukino-kai. Each group practices 2~3 times a week and they each perform at many events and collectively they perform at over 75 events annually throughout California including in cities such as Los Angeles, Orange County, San Francisco, San Diego and in Las Vegas, Nevada.
Los Angeles is a very unique city with a large population immigrated from more than 150 countries and they live together in harmony. To live together in harmony people need to communicate with each other and understand each others culture. Music or Folk Song is the universal medium to communicate with each other without having to know other languages.
Nanka Nihon Minyo Kyoukai or the Japanese Folk Song Society of Southern California continues to actively perform and strives to preserve the traditional Japanese folk song and folk dance. ” ey perform at events such as the Oshogatsu in Little Tokyo, Nisei Week Japanese festival, Cherry Blossom festival in San Francisco, Autumn Festival in Las Vegas and San Diego, and at the folk song show in Japan each year for past 53 years, to name a few. Nanka Nihon Minyo Kyoukai has been a sponsor of the Japanese Folk Song and Dance Show at the Armstrong theatre in the City of Torrance for the past 23 years.