Consul Toshio Odagiri, who had prvided a tremendous support to Los Angeles Japanese community for over 3 years, has received assignment of relocation and left to Qatar on September 5th. Prior to his departure, the chamber consulted the consul’s busy schedule to plan a farewell event, and received the generousity of sparing the lunch time of September 5th for farewell luncheon. Even though it was only 5 days notice, over 70 community leaders gathered to the banquet room of The Miyako Hotel to bid farewell to the consul. 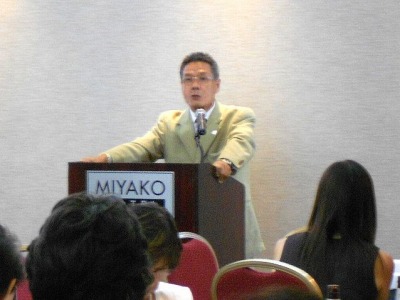 After the lunch, a bouquet was presented from the chamber to Mrs. Odagiri through Consul,

then a picture book of Los Angeles with full of messages from community members was presented to Consul Odagiri.

At the end of the luncheon, we received a gracious speech from Consul Odagiri, with full of the words of thankfulness to the community.

We wish from the bottom of our heart a good health and success of Consul Odagiri in his new life in Qatar.